Text only | Text with Images

So off I go to the local auto parts place.  The oil shelves are half bare and occupied mostly by weird stuff like 0W-20. No 5W-40.  I go another store.  Same thing.  Then to Walmart.  Same thing again.  Eventually I ordered it online.  Has anybody else noticed this?  Looks like I may need to keep my eyes open for whatever my 6.9 uses and hoard it.  I fear that the end is drawing nigh. Cheers,   :P
Title: Re: Motor oil shortage?
Post by: nathan on 24 March 2022, 04:38 PM
I think someone modified your owners manual, there is no way the GL churns through oil like that unless there is a problem I would suggest.  Dad still has his GL500 he bought new, no issues at all with oil consumption.

Interesting re supply concerns.  Logistics and shipping for everything has fallen off the table in the last 6 months for anything!
Title: Re: Motor oil shortage?
Post by: rumb on 24 March 2022, 07:21 PM
Congrats on the new vehicle.  Wow, I looked up the oil consumption. Better stow a case in the back of the car for road trips!
Title: Re: Motor oil shortage?
Post by: goldacre on 25 March 2022, 09:31 AM
Engine oil consumption is normal, apparently its essential, have come across engine spec details which declare engine oil consumption levels to be expected, belive its in the W116 library for our cars engines in the spec sections from memory. Of course as engines get older they burn off more, we have all seen and/or owned those  ::)

Interesting observation about oil stocks, wonder if the dooms day preppers are stocking up with current Europe situation?  Been a while since last checked shops  :-\

G
Title: Re: Motor oil shortage?
Post by: daantjie on 25 March 2022, 09:58 AM
Indeed I have never quite understood folks' obsession with having "0" oil consumption on an engine.  We always had Toyota's in our family and they are known to use oil, at least back in the day, and we did galactic miles on them with no issues.  Especially my dad's 21R engined Cressida, man that thing just went and went.  That "R" series of engines was pretty much the OM617 of gas engines, super tough and reliable.  No smoke ever out the tailpipe though, just a quart every few thousand km's. Even my Honda Civic, goes through a fair bit, no smoke and it pulls like a train, especially once the VTEC kicks in (for the Honda fans ;D  ;D  ;D ) so I really see no issue with it. Unless you get steady blue smoke, then of course it's pretty much terminal.
Title: Re: Motor oil shortage?
Post by: revilla on 25 March 2022, 10:17 AM
A bit of oil consumption is always expected, but 1lt/600 miles by design??? No way, something's wrong here.
Title: Re: Motor oil shortage?
Post by: ptashek on 25 March 2022, 10:48 AM
I was anticipating that supply may get tough with what's going on in Ukraine and all the sanctions on Russia, and have stocked up on 40 litres of 10W-40 oil for my fleet. That should last two years.

I'm more worried about Mann+Hummel ceasing production of the M117, M102 and M104 oil filters more than engine oil supply. My current stock will last about 10 years, but the batch dates don't look promising.
Title: Re: Motor oil shortage?
Post by: raueda1 on 26 March 2022, 10:37 AM
For the oil consumption doubters, note pic from owner's manual.  They don't seem to be saying that 1L/600 miles is the norm, just that it may be that much.  Still, pretty crazy and doesn't seem to be a joke. Make of it what you will. 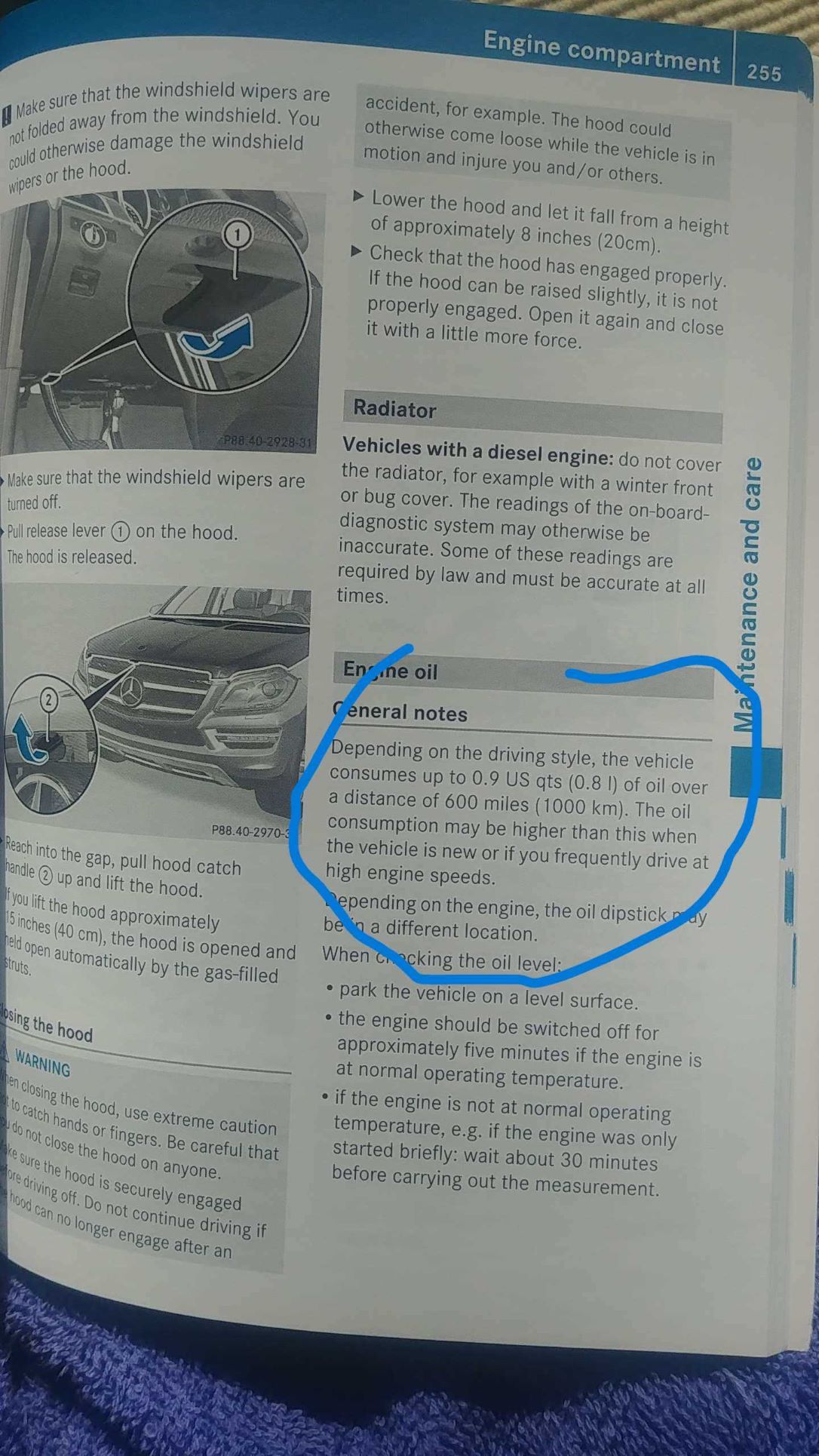 Title: Re: Motor oil shortage?
Post by: nathan on 26 March 2022, 07:27 PM
Raueda, thats wild they would put that in writing - you would not buy a car if you knew this.  For the factory to say that seems very strange.  They should put in the average oil consumption.  If its normal to use 1L of oil every 1000km, the service interval couldnt be 20000km?!  It would mean the car should have an oil capacity of about 40l !! Not doubting at extreme operating conditions you could burn some oil, but for average Joe to get figures like that implies a major engineering fail.  Anyway, very strange and interesting pickup
Title: Re: Motor oil shortage?
Post by: Casey on 26 March 2022, 10:39 PM
That's surprising indeed!  I had moved to an X164 GL350 a couple years ago, and really liked it.  It didn't burn any oil at all but a diesel engine is very different.  Squinting at your manual picture, I think yours is an X166?

I ended up selling mine a year ago and buying a cheaper and even more practical pickup, though I'll likely reverse that decision sometime.  I have enough cash to do that now, but I'm more interested in saving more and finding a totally impractical 6.9 now, haha.
Title: Re: Motor oil shortage?
Post by: goldacre on 27 March 2022, 08:50 AM
Wow, that manual script is scary, as Nathan says about oil volumes you would need to keep an eye on the dip stick, thinking it would be your new hands on friend  ??? My brother in law when in the business would talk to oil reps and they told him regardless of the oil type 7000klm was max, guess the high oil 'normal' consumption would be the work around by the car maker to ensure new oil introduction  :-\ was looking at BMW X 5s and if an owner maintained 20K oil changes the timing chain would be naff at 200,000; and the bright sparks at BMW and Audi put the chains at back of engine  ::) in AU $ that's a $7.5K job by a reputable mechanic  apparently,  all my cars it 5,000klm or 12 months, whatever occurs first  :-*
Title: Re: Motor oil shortage?
Post by: ptashek on 27 March 2022, 12:03 PM
Nothing surprising on the consumption. The W116 manual has the same or close enough figure quoted, as does the W124s. My relatively modern daily Toyota diesel burns 0.25-0.5 l/1000km and it's perfectly within spec.

Engines burn oil, one way or another. You loose some due to evaporation.

Until you leave a trail of blue smoke behind, there's no need to panic:)
Title: Re: Motor oil shortage?
Post by: karmann_20v on 15 April 2022, 11:31 AM
I just noticed this thread. The oil consumption in the manual is a way for manufacturers to cover their ass for warranty claims, which doesn't mean that the engines were designed to drink 800ml of oil/ 1000kms. The more recent Honda turbocharged gasoline engines (direct injection) have an oil dilution "feature", where gasoline finds its way from the cylinders into the oil, as owners found the oil level on the dipstick way over the max mark not too long after an oil change with oil filled to the correct level, so this is like a gift that keeps on giving and quite opposite from oil consumption, for those concerned.
Title: Re: Motor oil shortage?
Post by: rumb on 15 April 2022, 06:07 PM
My daughters Audi 2l turbo had porous material in the aluminum head that allowed oil to leak into the combustion chamber! It consumed a lot of oil.
Title: Re: Motor oil shortage?
Post by: Type17 on 26 May 2022, 03:55 PM
My petrol Audi TT owner's manual (and my diesel VW Golf manual before it) says that up to 1 litre per 1,000km oil consumption can be considered normal, but that levels above that should be checked out.

My TT engine (2.0 turbo 4-cylinder, 20 valve) is somewhat infamous for having poorly-designed oil scraper rings which, if the oil isn't changed regularly, clog up and cause bore-damage & massive oil consumption, requiring a rebuild.

Knowing this, I keep an eye on oil consumption - recording how much added and at what mileage on a spreadsheet, which calculates average consumption per 1,000km - fortunately my engine's consumption is about ⅓ of the maximum considered acceptable, but it definitely uses more oil when a lot of the kms are fast, motorway kms, rather than urban stuff.